Kindy Cuts Inclusion In The Bush

Changes to kindergarten funding for vulnerable children and children with additional needs were announced on August 1, 2019 and are completely unacceptable, according to Member for Gregory, Lachlan Millar MP.

“It is unheard of to cut funding two-thirds of the way through a school year. To do so in a way that leaves community kindies to raise tens of thousands of dollars to cover the shortfall or to exclude the children most needing their service is simply disgusting,” said Mr Millar.

Kindergartens in the Central Highlands were informed last week that the Queensland Government had changed the basis on which eligible children receive funding under the Kindergaten Inclusion Subsidy Scheme (KISS).

In a surprise decision KISS funding was changed from August 1, 2019 from a child-centred model to a capped “service” model.

The changes mean that approved budgets for the 2019 school year have been left in disarray as kindies are being told they will not receive the funding that children are eligible for under the new KISS model.

The change will leave Emerald’s Borilla Kindergarten with a budget deficit of nearly $40,000 despite having approved budgets and being two-thirds of the way through the school year. The only way to avoid the deficit will be to immediately reduce kindergarten hours for children with high needs, but Kindergarten Director Jenny Findlay believes that will be devastating for the children and their families.

“This is not a budget error affecting just one country kindergarten. It is a state-wide policy that has been announced with no consultation. Are we in such a desperate way financially that we have to take funds from our most vulnerable?” asked local MP Lachlan Millar.

“Kindergarten has proven benefits in preparing children for the start of formal schooling in their Prep Year.  The advantages of kindergarten still persist into Years Two and Three.

“The recently released AEDC data supports early intervention and has identified a higher need in this region.

“ Only two weeks ago the Education Minister told Estimates the Palaszczuk Government is so strongly committed to quality kindergarten for all Queensland children that it is one of their Advancing Queensland priorities. As she said that, she must have known then that the funding that helps our most vulnerable children go to kindergarten had been slashed in Jackie Trad’s budget,” he said. 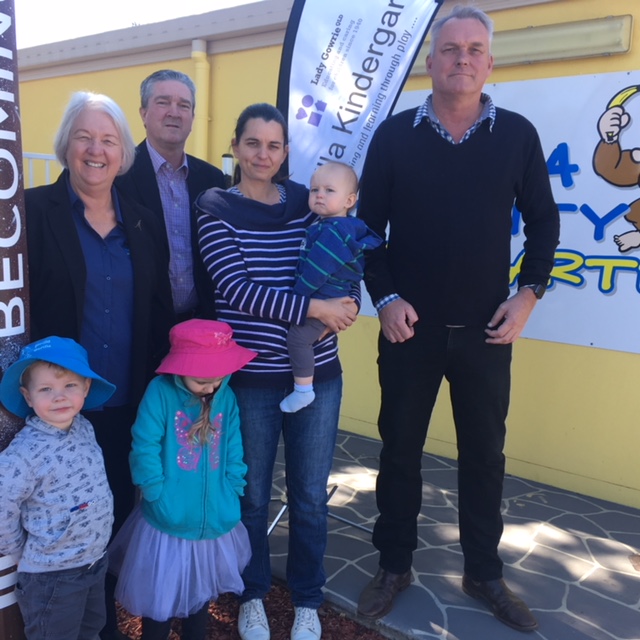 Mr Millar said most state governments provide KISS funding and it was fundamental to an inclusive schooling model.

“The change from a model which funds each child according to their needs to a model with a flat fee per kindergarten service is not fit for the purpose of the program. The purpose is to provide a safe and meaningful kindergarten experience for all children.

“When the amount of funding is related to the amount of resources a child needs, then kindergarten becomes possible for every child.

“The fee model means that kindergartens won’t have those resources. Exclusion is in the DNA of the new funding model,” he said.

“Kindergartens will be forced to make revolting decisions. Do we accept severely disabled Child A, or two Child B’s because they are less disabled? This is so unfair it makes me furious,” he said.

“It is bad enough that we will see an immediate reduction in kindy attendance. Over time, the bad effects will accumulate and this funding model will see the children with the greatest challenges excluded. This will have flow-on effects on their participation in Prep and on into primary school.

“This is the opposite of Inclusive Schooling. If those words are to be more than government propaganda, the Minister must restore the funding dollars and the fairer funding model.”

Mr Millar was joined by Mayor Kerry Hayes and Councillors from the Central Highlands Regional Council at Borilla Kindergarten in Emerald this morning, to discuss the impact of the cuts with Kindy Committee Members and staff.

“Children at this age are often receiving their first assessments and diagnosis for developmental delays and learning disabilities. In country Queensland we don’t have access to services like AEIOU, so our kindergartens play a vital role,” said Mayor Kerry Hayes.

“The latest statistics from the ABS Australian Early Childhood Education Census shows Emerald’s need for quality kindergartens has increased over the last six years. I respectfully ask the Minister to review the impact of these cuts on the children of regional communities,” he said.